Around the World in Film is a column dedicated to celebrating global film and its potential for expanding perspective. Each recommended film is from a different country and chosen for its unique take on storytelling, as well as accessibility for audience members who might not have seen many films outside their own cultural context. For our second edition, we’re heading to India! 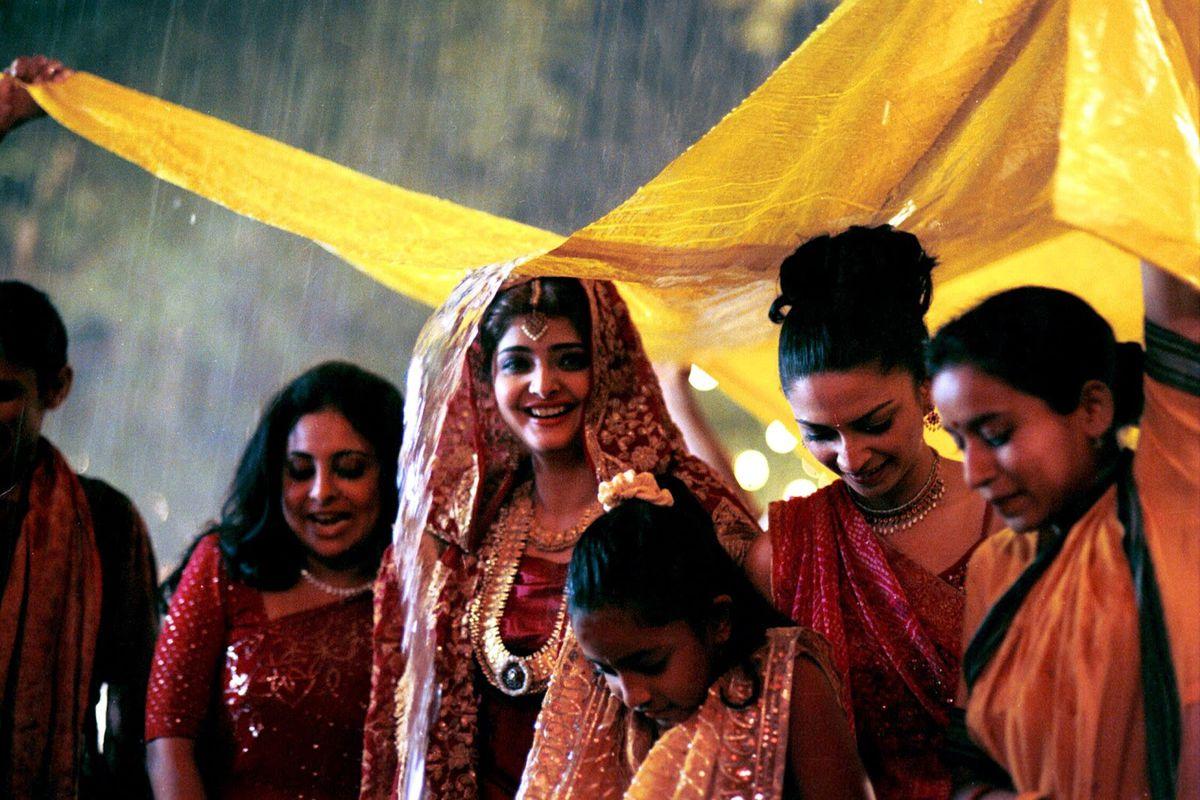 The first time I saw Indian-American director Mira Nair’s firework of a film, Monsoon Wedding (2001), I cried. The music, the use of colour, the beautiful storytelling – I couldn’t believe something so magical existed. The second time, I cried again and knew I had to write about it. The third time, I cried yet again as I watched it with my Mum.

Monsoon Wedding follows the reunion of an upper-middle class Punjabi family in Delhi for, unsurprisingly, a monsoon wedding. Nair masterfully unfolds five different stories of love over a few days of jubilant, exhausting and tense ceremonies and functions. Stories of new love, old love, and of other sensations masquerading as love, such as lust, and most disturbingly, abuse.

With all the impossible and interconnected ways love can manifest at the heart of the film, it is not surprising that love seems to pour out of every aspect of the film’s construction.

Shot in 30 days on handheld camera, coupled with the amazing chemistry of the ensemble cast, the film has a distinctly documentary-like feel. Nair was inspired by her own family here, and it shows. Every scene is intimate, close, like listening to a whisper passed around the table. There were moments I tried to rewind for missed dialogue, only to realise it had been naturally cut off, just like in my own family. The combination of stress and excitement, agitation and jubilation: it’s tangible. You are there with them: buying saris, paying bills, singing, sighing, laughing, crying and gasping as you get to know them, as they get to know each other better too. Nair invites you personally to play witness to their beautiful inner-workings, to shallow family gossip, and to huff and sigh over their conflict: some worth the drama, much not.

This was one of the first films which made me fall in love and pay active attention to a film’s visual style. The colours – rich deep yellows, oranges, reds and pinks – correspond with the celebration: of the bride’s lehenga and the couple’s wedding garlands, of sarees and turbans and hot sunsets obscured by city fog. And most of all of marigolds. The cinematography is lush, gorgeous, with the heat of Delhi building alongside the personal conflicts of the characters, finally bursting into joyous rain, bright green foliage finally drenched after a drought.

I love big, epic (and cheesy!) Bollywood romances like Jab We Met and Dilwale Dulhania Le Jayenge. But for me, the romance in Monsoon Wedding is another level of intricacy and intimacy. The love story between Alice and Dubey in particular always makes me smile like a smitten puppy. They speak so little to each other, yet their connection is so obvious, explored beautifully through subtle glances, marigolds, and glasses of water. Their relationship would not be what it is however, if it was not for the music.

‘Love and Marigolds’, which is basically Alice and Dubey’s love theme, is my personal favourite moment on the entire soundtrack. I become starry-eyed every time I hear it. I’m still unsure as to how it captures their feelings so beautifully, so delicately, while bringing me to tears every time. It was actually Monsoon Wedding’s music, composed by Mychael Danna, which first drew me to this film. I heard ‘Aaj Mera Jee Karda’ in the trailer and knew I had to see more. It is powerful and seizes your attention immediately. I can think of no better track to play over the arrival of the Delhi monsoon, demonstrating the undeniable impact nature has on the daily lives of people otherwise removed from its impacts. ‘Mehndi Madhorama Pencha’, a traditional Punjabi wedding song, captures both the intimacy and warmth of the mehndi ceremony, but also exclusion as Alice, a household servant, is unable to take part. ‘Delhi.com’ establishes a city on the cusp: torn between ancient tradition and a new, more flashy and Westernised existence, a tension our family navigates throughout the film .

But in a film about love, the thing I *love* most about it is the way it makes me feel; namely how it helps me feel love. As anyone who knows me will know, I spent three months in India in 2017 on my gap year. Yes, I was that gap year kid who never stopped talking about it, but there was good reason for that, and there continues to be now.

On that trip, I experienced love in a million ways I never imagined possible. Most strongly of all, a love of being alive, of being present in the world, of experiencing life. When I returned home, heartbroken knowing it was an experience I could never recreate, I turned to countless films for comfort. Comfort they provided, but Monsoon Wedding was the first film that made me relearn that love I had once known so well. And encountering it again, I realised it had never truly left me. And for that reason, and so many others, I hope you will give it a chance to let you feel love, too.